On Sunday, May 31, 2020, an online workshop on STEAM education and an interview with an Olympic gold medalist were held, and many students from all over the country participated. All workshops were conducted in English.
Ledecky is an American competitive swimmer and won five gold medals at the 2012 London and the 2016 Rio de Janeiro Olympic Games.
She is also committed to STEAM education.

First, students were pre programmed to learn about STEAM Education and then participated in the workshop. It was divided into four themes such as “Home of the Future” and “Data Champion”, and students listened to STEAM lecturers at the workshops they were interested in.

"The designer can't design everything," said Michael Shadovitz , home of the future STEAM instructor, at the workshop. Taking his slippers as an example, "My favorite leather slippers are comfortable to wear and they remind me of baseball gloves. It wasn't designed by the designer," said the instructor.

“What is your dream?” “My dream right now is to be in Tokyo next year. That was my dream for this year. I was hoping to be there with you and Tokyo, but now that the Olympics are postponed. My new dream is to be there in 2021 in July.”
This was a conversation between a student and Ledecky. The Tokyo Olympics have been postponed, but she has been working hard.

The STEAM Education that has been coming out many times.
STEAM stands for Science,Technology,Engineering,Art and Mathematics.

Originally it had been called STEM, but with the addition of the elements of Art, it is now called STEAM. It emphasizes those five factors, and Japan is behind this method.

Editorial Note
When I joined the workshop and interviewed Ledecky, I thought that “This is once in a lifetime chance! “Maybe I won’t be able to have such an experience in the future. Joining the workshop about STEAM Education and interviewing an Olympic gold medalist was a valuable experience! 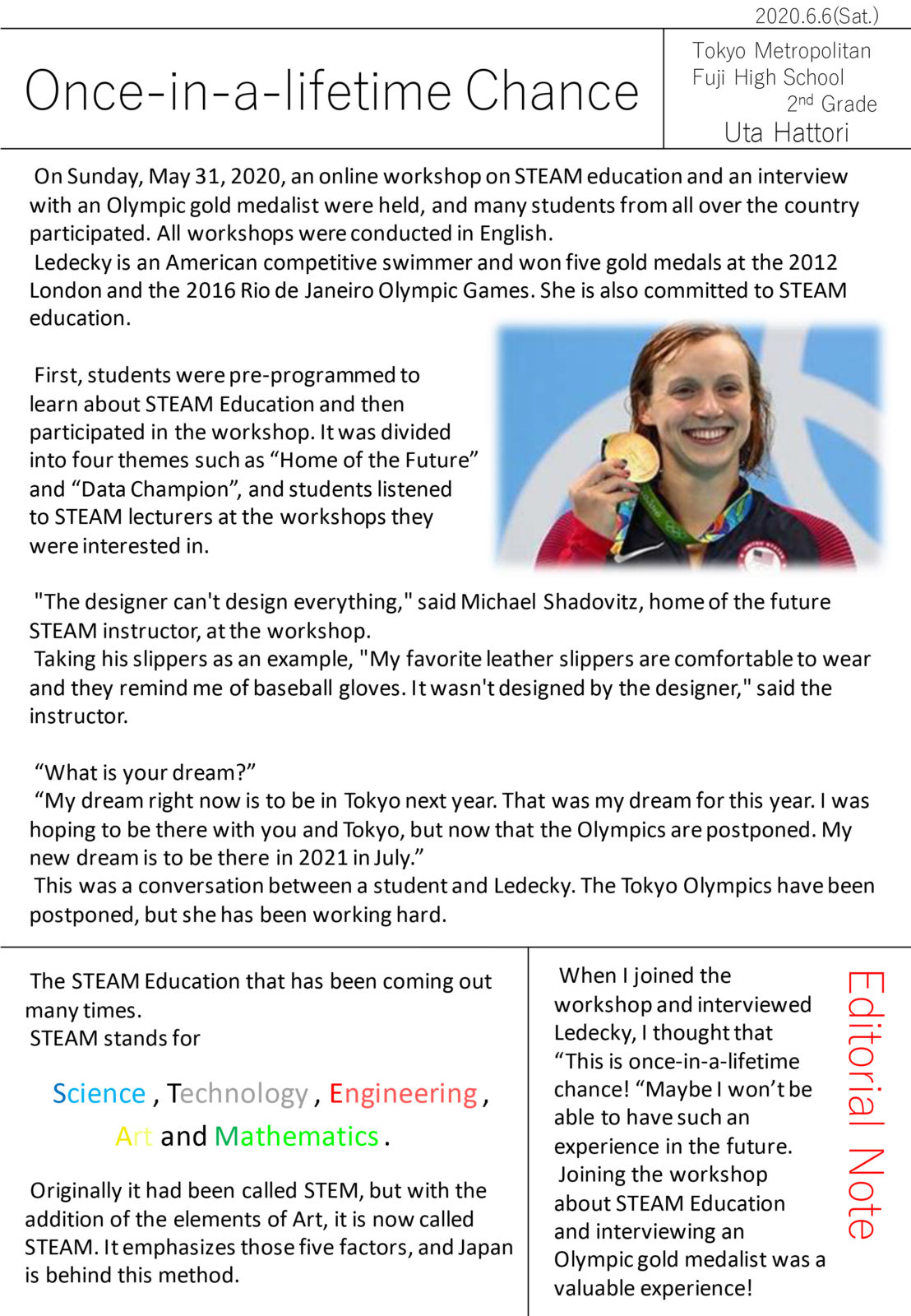 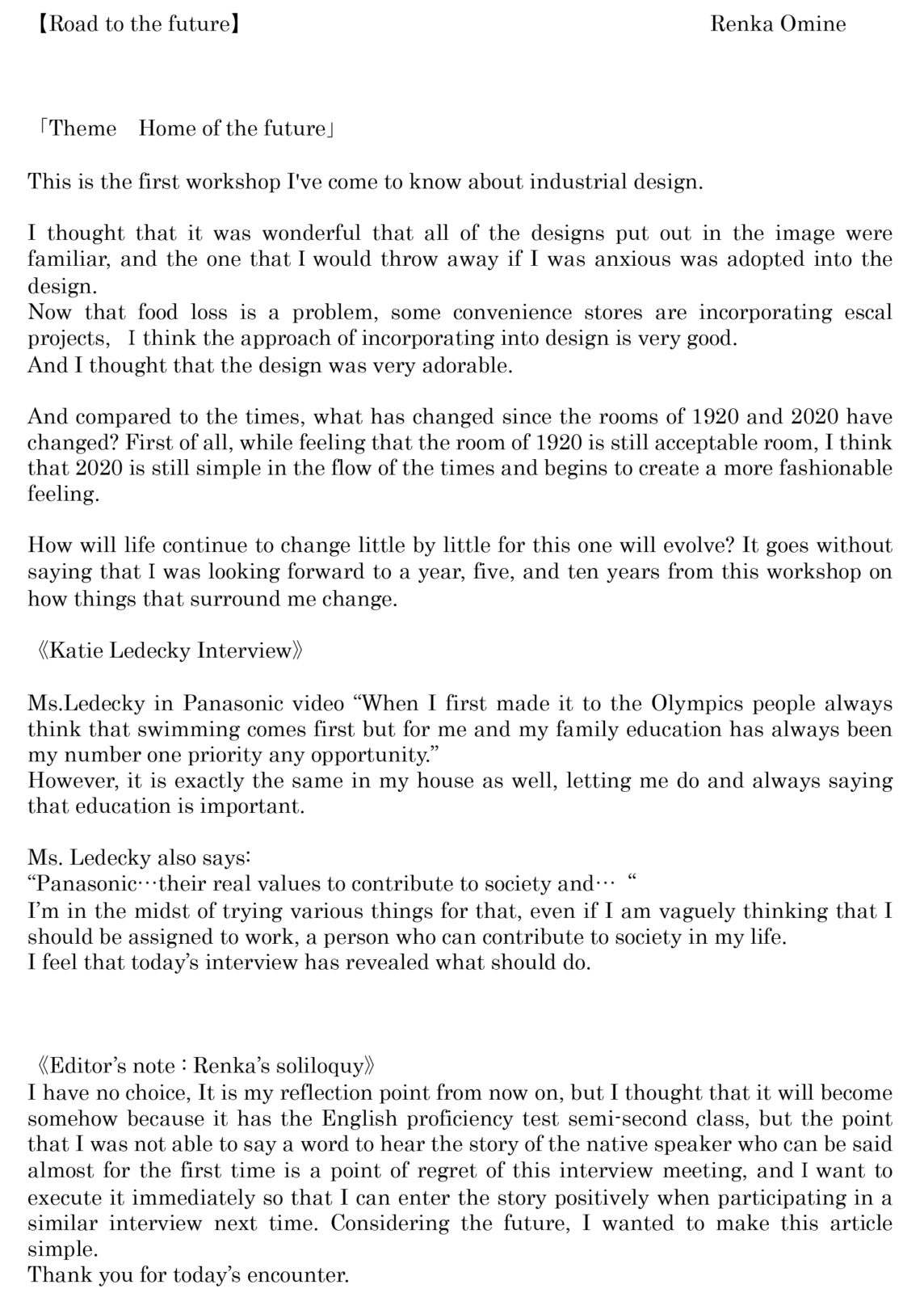 Road to the future
大峰蓮華 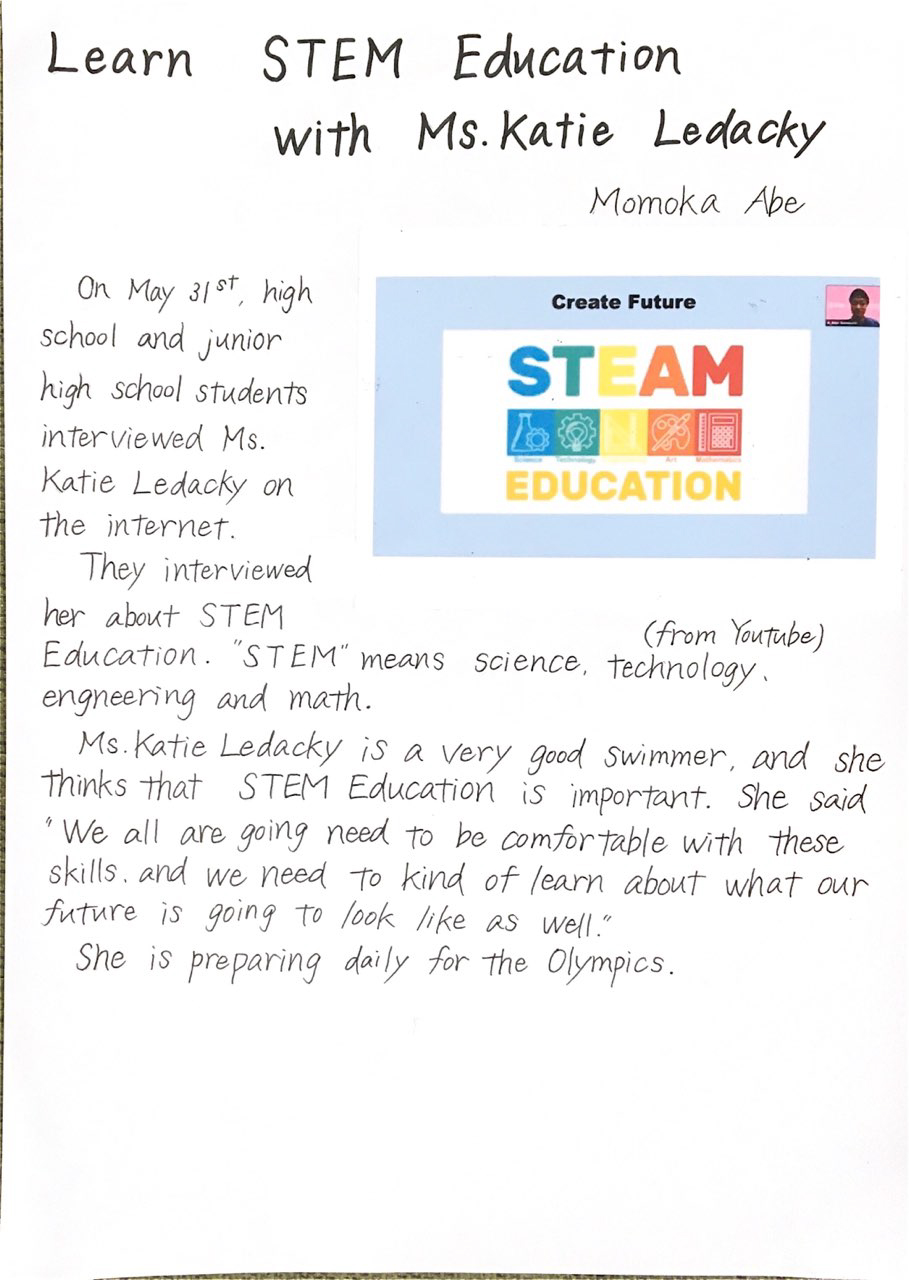 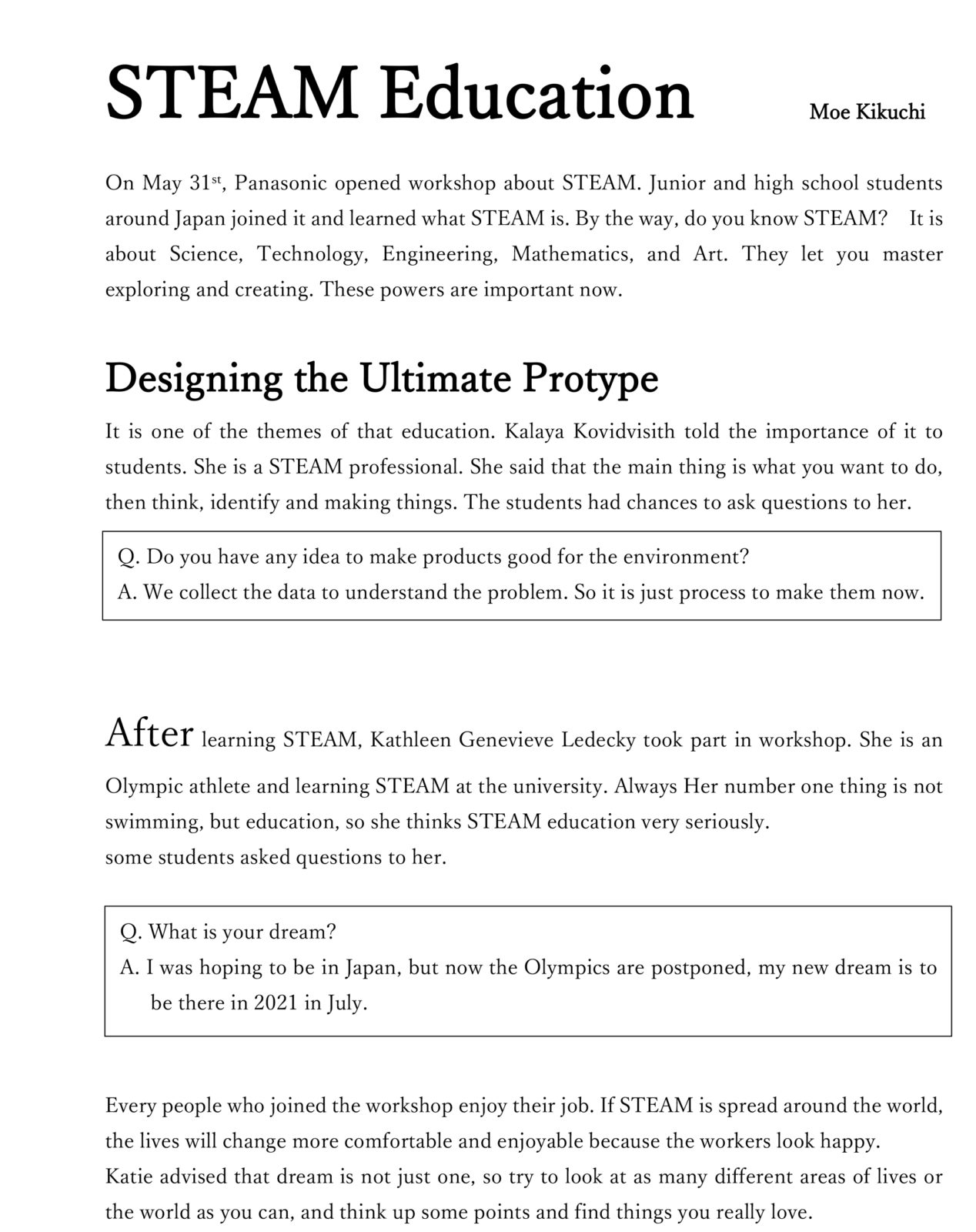 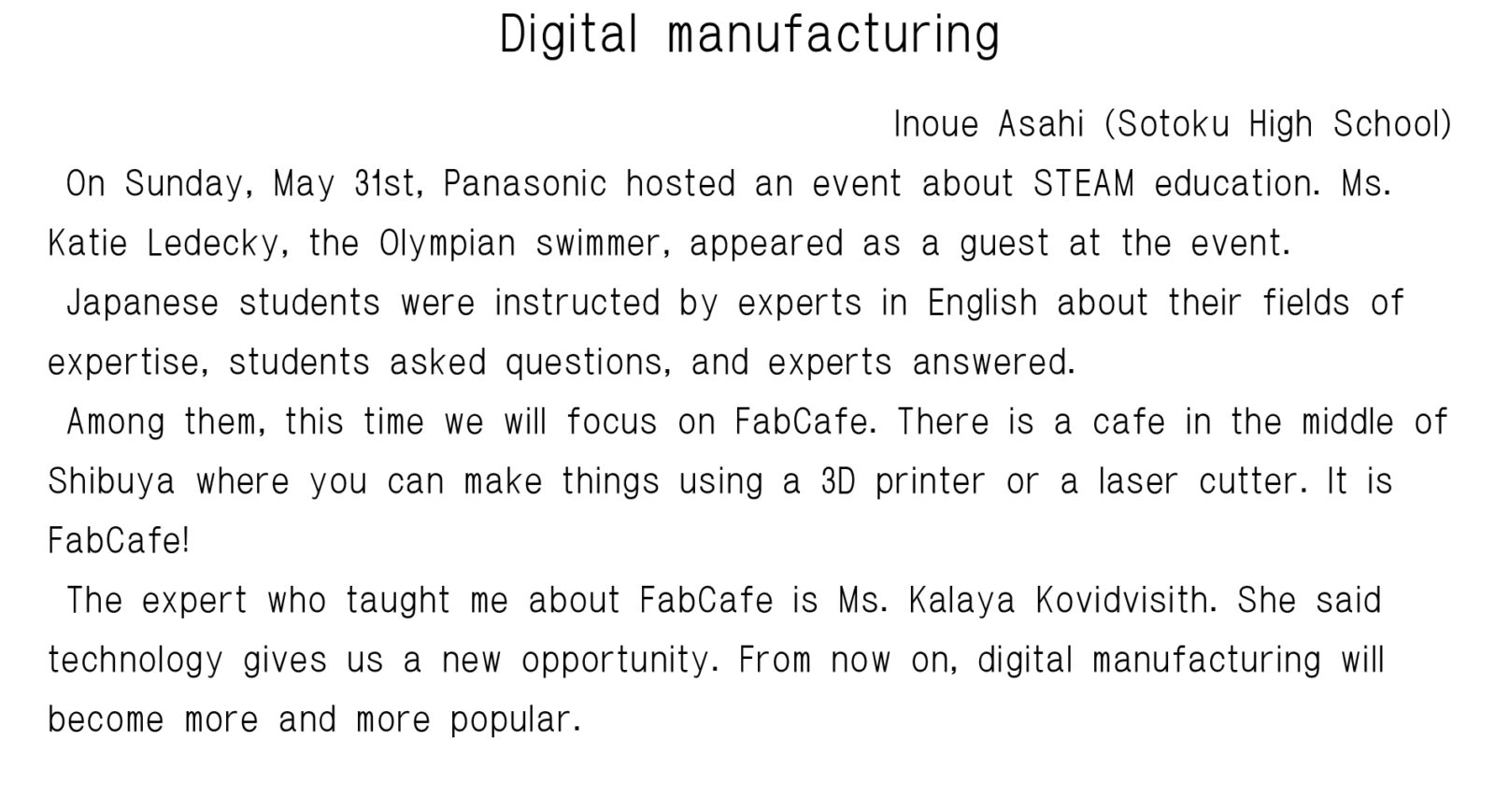 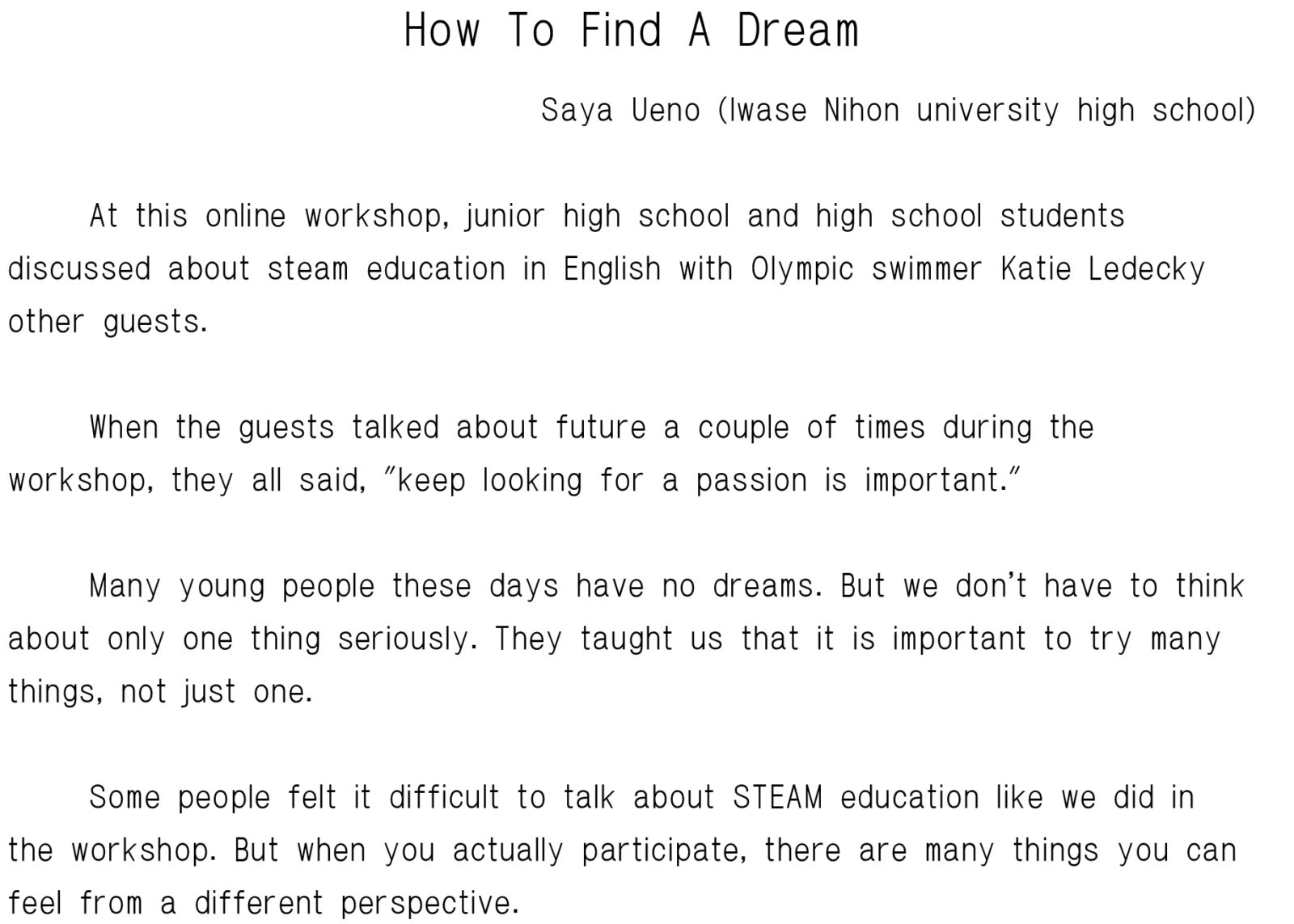 How To Find A Dream
上野沙耶 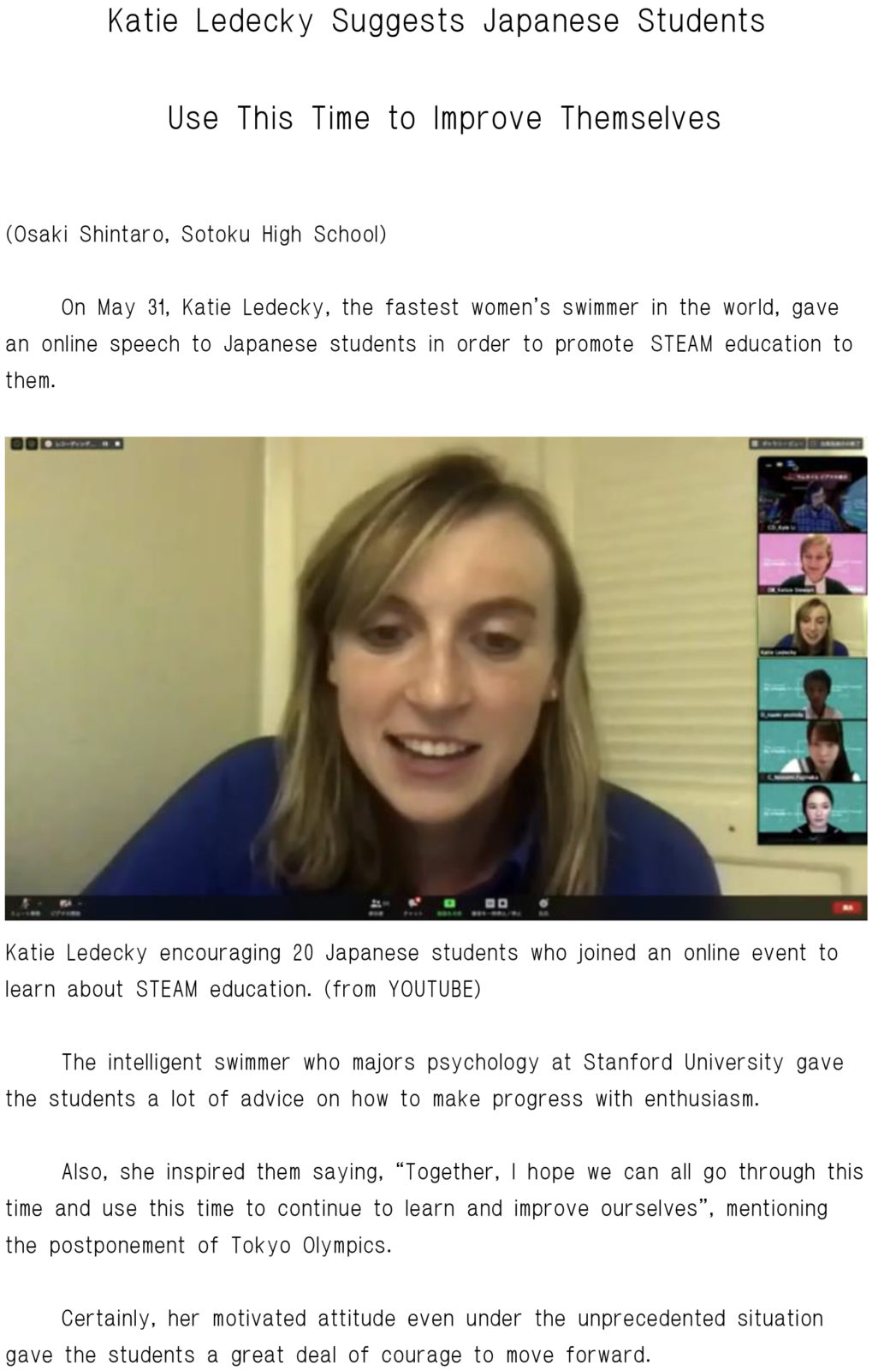 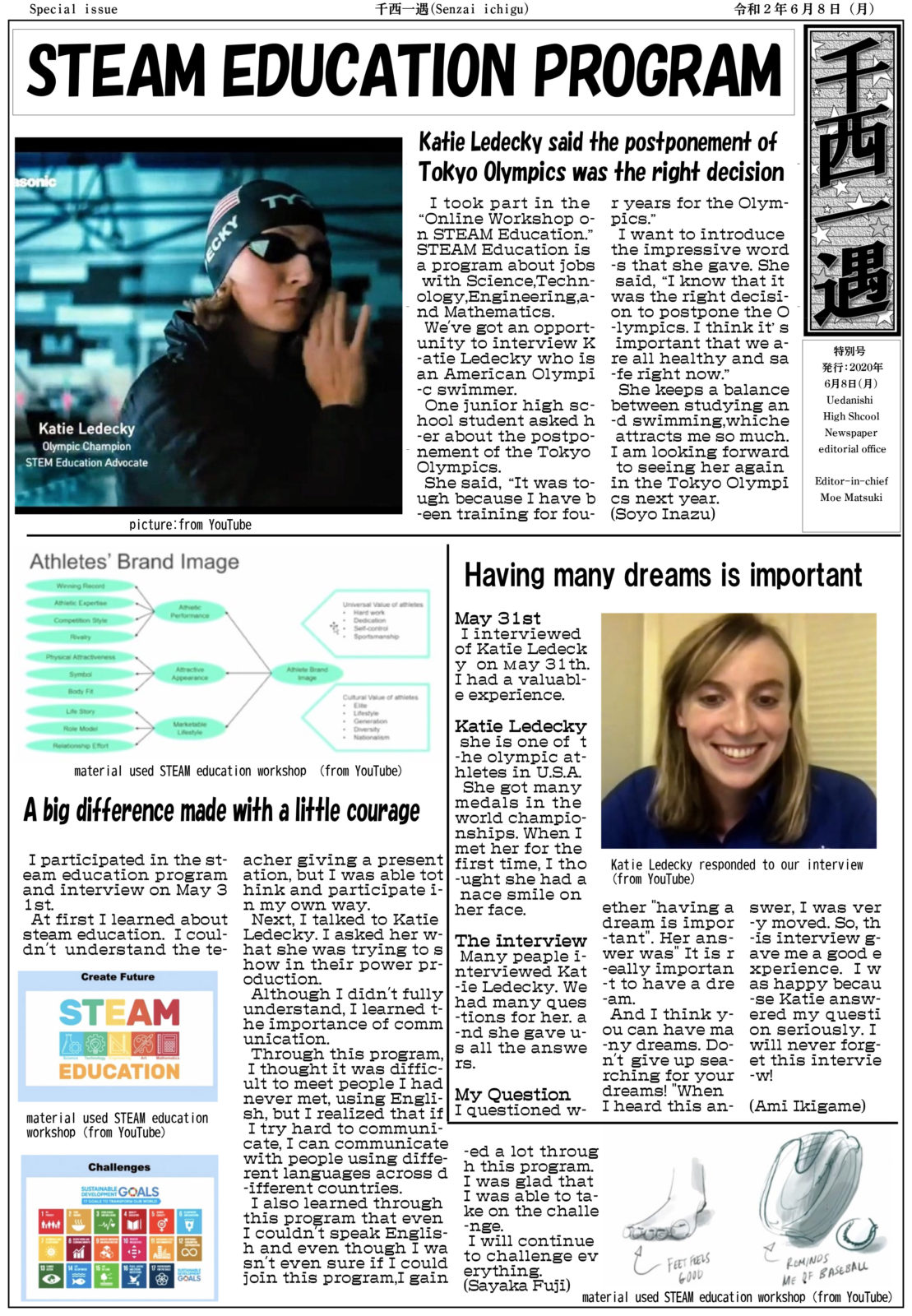 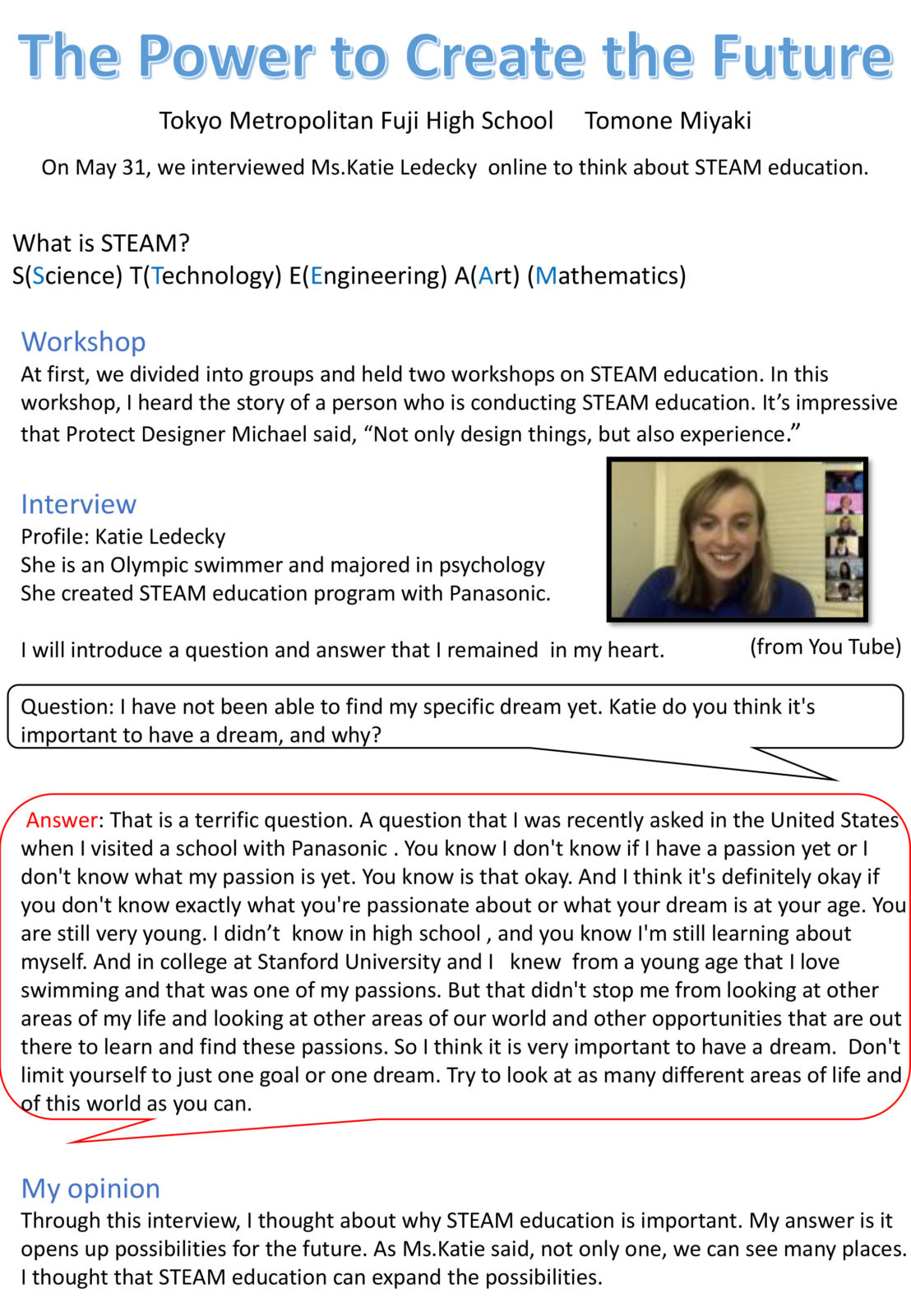 The Power to Create the Future
宮木朋音 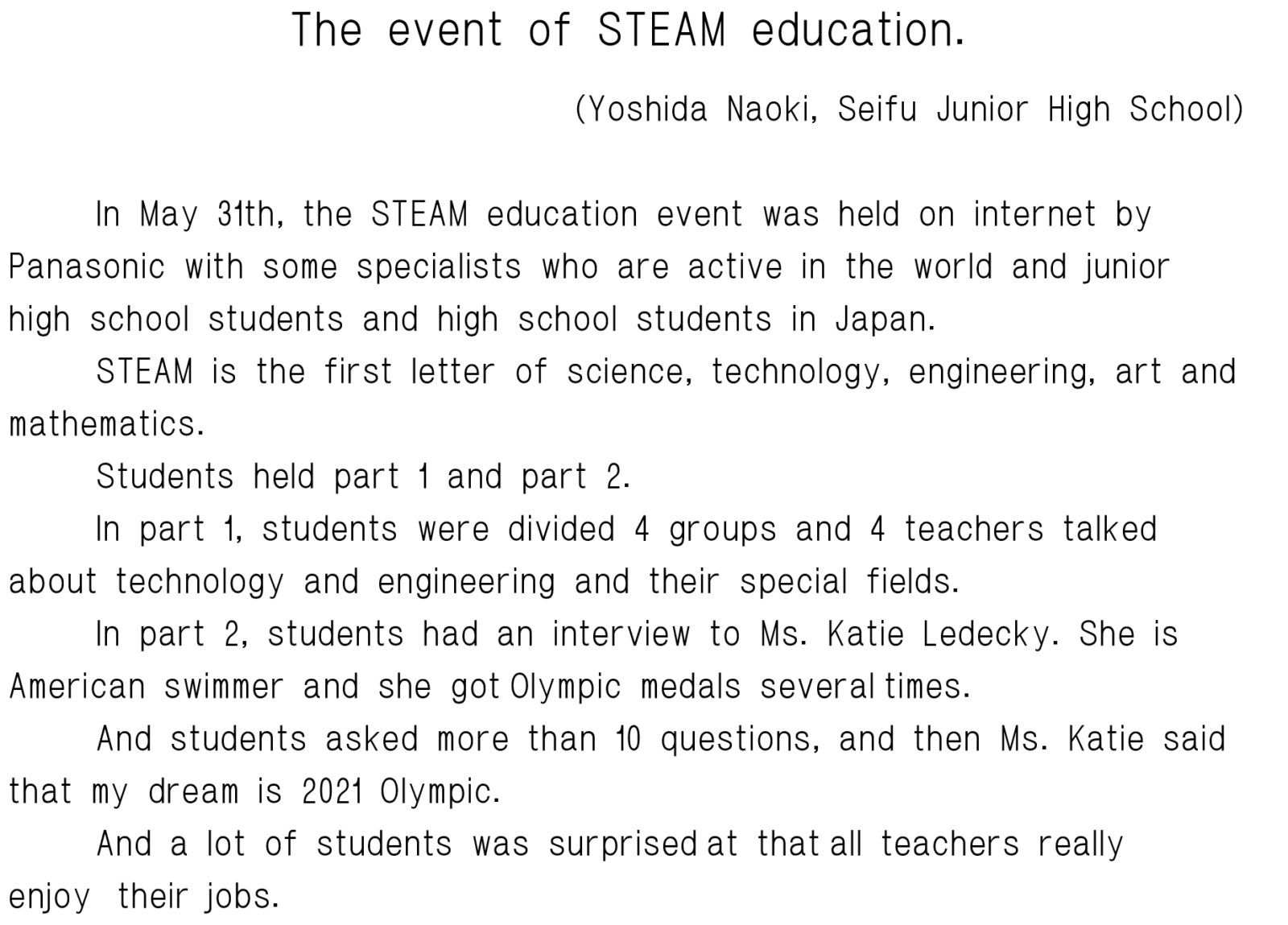 The event of STEAM education.
吉田直輝 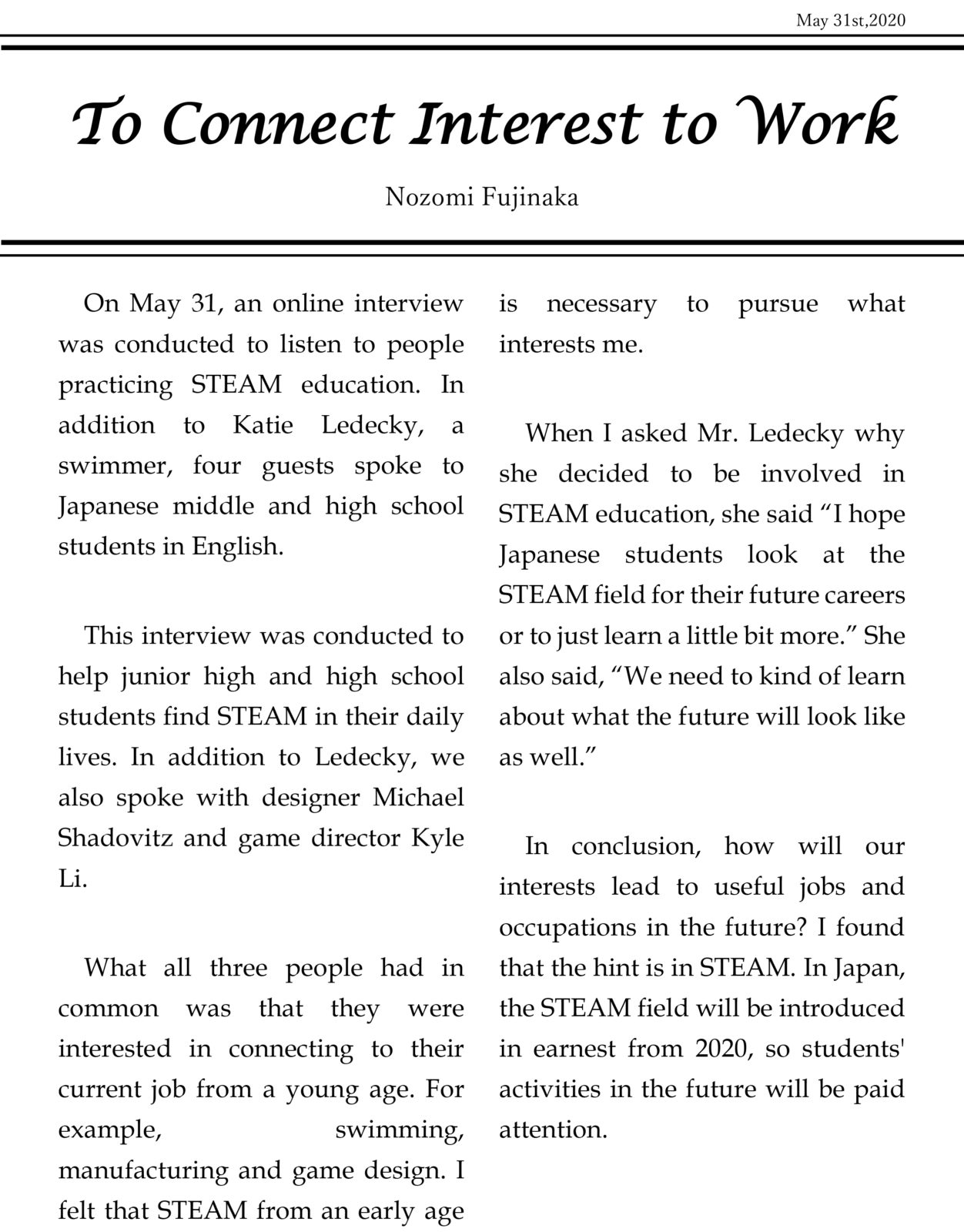 To Connect Interest to Work
藤中希美 HOW CAN YOU BE CREATIVE?
横山舞